Exciting news - the AllHazards Blog has a new home. It has now joined the AllHazards.Net site that offers a wealth of resources including free and low cost tools for situational awareness, risk analysis and simplifying keeping up to speed on events in an information overload world. Click on the image below to take a look at the new home. We will continue to leave this site up so previous posts can be accessed. Remember you can also follow us on Twitter at @allhazardsblog. 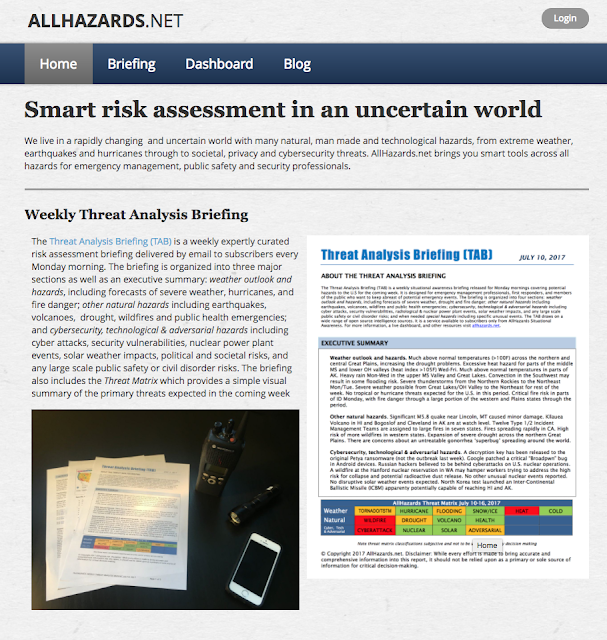 Check out the new AllHazards Dashboard, a one-stop shop for situational awareness for incidents in the U.S. The Dashboard is organized into four sections that pull together graphical, real-time content for current hazards. The sections are: 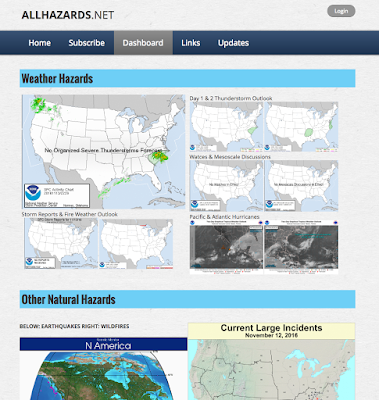 Our sister site, AllHazards.net, just launched a new subscription service for emergency managers, responders, and interested members of the public called the threat analysis briefing. This briefing is delivered to subscribers every Monday morning, and contains a detailed review of potential threats for the U.S. in the coming week, organized into four broad categories:
The detailed content is curated from many public sources which are referenced in the briefing, by experts in emergency management, threat analysis and data science. On the front page is an executive summary that can be read in under a minute - below is the executive summary of last week's briefing, for instance, along with some figures from the briefing.

Go to the Subscribe page on the AllHazards site to learn more.

Image from the Weather outlook and hazards section: 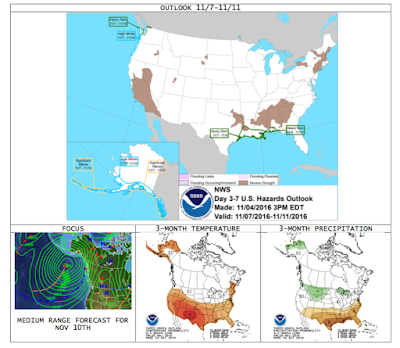 Image from the other natural hazards section: 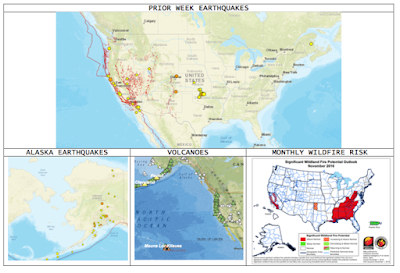 There is a recurring problem with Twitter as an information source in disasters, in that, even when you are using the "live" feed of tweets (i.e. reverse chronological order) versus the "prioritized" tweets, you get old information keep popping up in the feed as people discover older tweets and retweet them

This is really obvious in the current Valley Fire in California. As of the time this post is being written, the current data shows 40,000 acres burned. But we keep seeing retweets of information from last night about it hitting 10,000 or 25,000 acres. At best, you see recent and old information juxtaposed, as in (62.5 square miles = 40,000 acres): 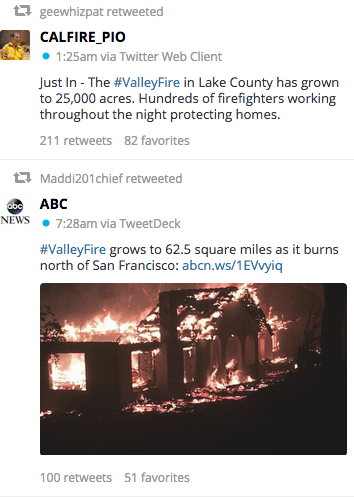 At worst, you just see the old information keep being retweeted.

I think the solution is for tweets to in general have more semantic metadata attached, but specifically for it to be possible for time-critical tweets to be issued with an expiration date and time at which point the information is considered stale. More advanced would be a "this tweet supercedes this previous tweet" relationship. This metadata would filter through retweets, etc.

Not sure if Twitter will do this though. Perhaps there is room more simply for automated filtering of old information in Twitter clients. Another simple fix would be to be able to have a reverse-chronological listing by time of original tweet, not retweet. 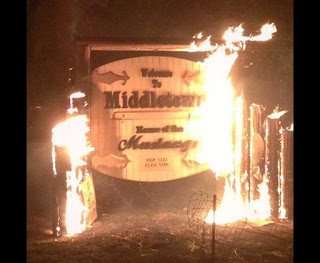 Possibly one of the fastest growing wildfires ever, the Valley Fire in California started early yesterday afternoon as a small plume of smoke in the forests of Lake County. Within a few hours, the rapidly growing fire was being watched by residents of nearby Middletown and Hidden Valley Lake. By early evening evacuation orders were in place for these two communities, and the fire had grown to 10,000 acres. By this morning, it seems that the fire has grown to 40,000 acres and these two communities have been completely consumed by fire.

All of this highlights the importance of being ready to evacuate your home in minutes; of planning out multiple evacuation routes; and in thinking ahead in a chaotic situation.

You can find out more on the fire at:

Evaluating tools for use in emergency situations

As a researcher in a technology related discipline, EMT, and hobbyist in radio communications and technology, a lot of technological "stuff" goes through my hands. I have been thinking a lot recently about what differentiates the technological tools that I end up going back to again and again, and that I would trust in an emergency from the rest.

Here are three factors that are clearly important for me:

First, Reliability and Robustness. This is the one that is most obvious, and is probably over-played, particularly by manufacturers justifying inflated prices becuase their device can withstand a forty-foot drop or submersion in water. But, in an emergency situation, you do want the best chance possible that your tool will work just as it always has, and will not flake out on you. It is interesting to note that reliability and robustness tend to be at odds with flexibility. A good example is my hiking GPS - a Garmin Rino 650. It only does one thing - show and track my location on a map - but it does that very well, and it always works. It always operates the same way when I turn it on, it always finds the satellites quickly, and it always shows the information in the same, simple way. Plus it's built like a rubber brick. In contrast, the navigation app on my smartphone is much more flexible - I can do all kinds of cool downloads of different kinds of maps, overlay traffic updates, find the nearest pizza store and so on - but it is not reliable or robust: sometimes the app requires updates before I can get it to run; sometimes the internet connection doesn't work; sometimes the app freezes or crashes. And if my phone gets wet, it's toast.

Second, Intuitiveness. Intuitive means that it works exactly as you’d expect, that working with it is straightforward even in a high stress situation. It means you spend your time thinking about what you are doing with the tool, rather than the tool itself. For electronic devices, that is sadly a rather rare property. A stark example here is given by two two-way radios I own: a Baofeng UV-5R (a super cheap, but surprisingly good chinese VHF and UHF radio), and a Racal 25 (a once expensive VHF radio used for military and wildland fire operations). Both radios are field programmable, meaning you can enter in the frequencies from the radio instead of with a computer. The Baofeng is super radio in some ways, but how to program it is almost impossible to remember, even in a low-stress environment. Conversely, the Racal just seems simply and cleanly designed to solve the problem, and frequencies can be entered and changed without even a glance at an instruction manual.

Third, disposability. This means I don't care too much if it gets scratched, or even ultimately broken, in the line of duty. This is why some of the "highest end" stuff simply doesn't make the cut even if it has the best specs - I'm never really going to want to take a $2,000 radio (that I paid for with my own money, at least!) into a rough situation.

So what other factors are there? Please leave any suggestions in the comments!


The last few years have seen an amazing shift in how information is shared in our everyday lives, and also in disaster situations. We're just starting to understand the impact of social media, websites, smartphones and other new technologies (for example, through the Social Media for Emergency Management (SMEM) community. But navigating it all is hard - for emergency management professionals, and even more so for the general public who are not used to thinking about disasters daily. Further, some of the tools used in emergency management, like hazard analysis and exercise planning can be adapted for individuals, to understand the risks they face, and how what resources they would use to help them if different kinds of events happen. So one of my passions is "grassroots emergency management" - enabling individuals, families, and small communities to do their own emergency management. 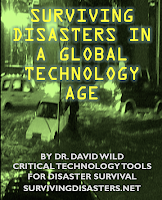 To this extent, I've created a new low cost eBook and associated website called Surviving Disasters in a Global Technology Age (survivingdisasters.net). This is really meant as a "how to" guide for individuals and families to begin their own process of emergency planning. The guide includes chapters on disaster psychology - understanding situational awareness and how mental states play into it; disaster planning - not just having a "go kit" but doing hazard analysis, mitigation, and tabletop exercises for a home; infrastructure independent technologies - practically covering a host of technologies less familiar to our modern lifestyle but which could be critical "when the lights go out" - from shortwave and mediumwave PEP radio stations through weather radios, FRS/GMRS and GPS trackers; online resources and smartphone apps including crisis mapping, using social media, news aggregation tools, and apps; and finally how people can join digital volunteer communities such as Virtual Operations Support Teams (VOSTs).

Obviously I can't cover everything, but my hope is that the book and website can be a "one stop" starter guide to get members of communities thinking the right way about emergency planning and technology. I am also developing the website to include free resources - right now there is a list of links and resources in the above areas that are referenced in the book; I'm also developing tutorial videos to be used alongside the site and book (right now there is just one up there, on developing a personal hazard analysis).

Please take a look at survivingdisasters.net and let me know if you think this would be useful in your community, how I could make it more useful, and any comments or questions you have! 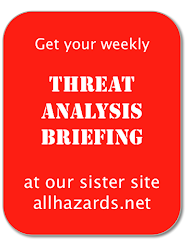